One area of law which is likely to be affected the most by Brexit is law surrounding the migration of European Union (EU) citizens into the United Kingdom (UK).

The changes being introduced are likely to affect most of your employees who are either EU citizens living in the UK, or are family members of EU citizens.

This note is to inform you of the agreements that have been made between the UK government and the EU and to enable you to signpost this information to any relevant employees.

Under the Scheme, the residence status of EU citizens will depend on how long they have lived in the UK and whether they arrived by the end of the “implementation period”.

What is the Scheme?

The Scheme allows individuals to apply for either ‘settled status’ or ‘pre-settled status’, thereby allowing EU nationals to continue living and working in the UK.

Individuals with settled status will continue to be eligible for:

EU citizens and their family members’ resident in the UK before 31 December 2020 (the end of the ‘implementation’ period) will be able to apply for a UK immigration status document under the EU Settlement Scheme. Depending on the length of the residence, applicants will be given ‘settled status’ or ‘pre-settled status’.

Those considered to be ‘resident in the UK’ includes those in the UK before midnight on 31 December 2020. It will also include those previously resident in the UK who are abroad on that date but who have maintained continuity of residence here. To be continuously resident in the UK, you must not have been absent from the UK for more than 6 months (in total) in any 12-month period, although there are some exceptions to this (e.g. serious illness, military service, studying etc.).

Irish citizens can choose to apply. However, eligible family members (who are not Irish or British citizens) will be able to obtain status under the scheme without the Irish citizen doing so.

More specifically, those that can apply are as follows:

Those that may not need to apply are as follows: 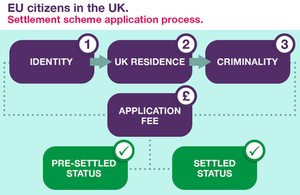 The Home Office have announced that applicants will be able to apply online. The online form will supposedly be short, simple and user-friendly. There will also be an option for a paper application form, although further details on this have not been released.

The majority of applicants will only need to prove their identity and their continuous residence in the UK. All applications will then be subject to criminal and security checks.

The government intend to publish ‘user friendly’ guidance to guide applicants through each stage of the process.

An application under the Scheme will cost £65 (the same as the current fee for the Permanent Residence document), which will part-fund the cost of the Scheme. For those under the age of 16, the fee will be £32.50. If an applicant is granted pre-settled status under the Scheme, from April 2019, there will be no further fee when they apply for settled status.

Applications will also be free of charge for those who already hold a Permanent Residence document or have been granted Indefinite Leave to Remain should they wish to exchange those documents for settled status.

An application can only be refused for a reason covered in the Withdrawal Agreement. This means that if you make a valid application, you’ll be granted settled or pre-settled status, unless: 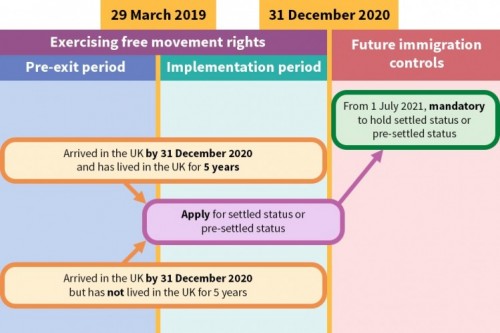 Those who are living in the UK by 31 December 2020 will have until 30 June 2021 to make an application for status under the Scheme.

From 1 July 2021, EU citizens and their family members in the UK must hold or have applied for UK immigration status to remain in the UK legally. You may be able to apply after this date if you are joining a family member in the UK.

Close family members joining an EU citizen in the UK after 31 December 2020 must aplly for status under the Scheme within three months from their arrival.

The EU has agreed that, where someone misses the deadline for their application for a good reason, they will be given a reasonable further period in which to apply.

Points to highlight and further advice

There is no need for EU citizens, or their family members, who are living in the UK to do anything immediately at this stage. Individuals’ rights will not change until 2021.

Although the general scheme has been agreed, its details and the exact procedure to be implemented are still unknown. There will understandably be great uncertainty for many EU nationals currently living or hoping to move to the UK. As such, it is crucial that these individuals are made aware of their options, the process to be followed and the requirements that have to be met.

Please note that is it a criminal offence for a non-regulated individual to give immigration advice. If your employees request information then you can sign post them to this information note. Further information can be obtained by contacting Howard Kennedy’s Specialist Brexit team at Brexit@howardkennedy.com.

Howard Kennedy can advise on all aspects of UK immigration law including advising individuals or businesses on matters such as applications for ‘settled status’ and permanent residency.