Apples and Pears - how similar are they?

Pear's trade mark application covered amongst others personal computers, laptop computers, mobile phones, related computer software and related services. This application was opposed by Apple Inc., on the basis of its registered rights and the reputation enjoyed in the European Union by its figurative sign:

Apple succeeded in its opposition launched in January 2015, and also in the subsequent appeal filed by Pear against the opposition decision. The figurative marks were considered similar enough, albeit to a low degree, for Apple to be able to rely on its reputation in its trade mark. Pear appealed further to the General Court. The recent decision in January 2019 by the General Court has reversed the success Apple has had.

The General Court has held that overall the marks are dissimilar. Therefore Apple's reputation in its figurative mark would not prevent the registration of Pear's figurative mark.

It is helpful to remember that in the context of comparison of marks, each mark must be considered as a whole, and in addition to the similarities, it is also necessary to take into account the clear differences between the marks.

In the present case the General Court considered that the visual differences between the marks being compared were stronger than any similarities.

The General Court also found that the conceptual differences outweighed any similarities: the Court disregarded the argument that the marks being compared were conceptually similar because apples and pears are fruits belonging to the same plant family and even sub-family, and being fruit that may be considered very similar in real life and possibly used as alternatives one for the other. The images were different in their semantic content and the consumer would not use the term fruit, instead of the terms apple and pear, when referring to the marks.

This decision may be appealed further by Apple. However, it is a useful illustration of the assessment of similarity of trade marks not the least because the earlier two decisions in this case have been reversed and also because Apple has in separate opposition proceedings successfully prevented the registration of another of Pear's European Union trade mark applications to register the following figurative sign: 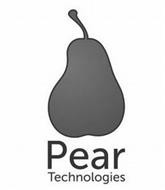 Owners of registered European Union trade marks can prevent the registration of subsequent European Union trade marks where the marks and the goods and services covered are at least similar and there is a likelihood of confusion by the use of the later mark. Owners of registered European Union trade marks which also have a reputation, have an even broader scope of protection. The owners of registered trade marks with a reputation can prevent the registration of later marks even for entirely different types of goods or services and without need to show a likelihood of confusion provided the use of the later mark would be without due cause and the use would take unfair advantage of or be detrimental to the distinctive character or repute of the earlier mark with a reputation. The conflicting marks must however first be assessed to be either identical or similar before the reputation in the earlier mark can be successfully used to challenge a later mark. The threshold of similarity is lower in these cases compared to cases where the earlier registered mark does not have a reputation in the European Union.

Only if the conflicting marks are found to have a certain level of similarity would it be necessary to determine whether there is a link between those marks in the mind of the public concerned. The distinctiveness and reputation of the earlier mark would then be a relevant factor for assessing whether a link exists between the marks in conflict in the mind of the public, and whether the consequent damage to the reputation of the earlier mark or unfair advantage to the later mark would ensue by the use of the later mark.